One of the most beautiful paths (iron roads) in the Brenta Dolomites. In a clear day you can see Molveno lake, Civetta and Marmolada.

To this via ferrata you can get from Rifugio Vallesinella down the path 317, until you reach Rifugio Casinei. From there, take the path number 318 to Rifugio Brentei, and then route 393 to Rifugio Alimonta.

From the Alimonta hut an easy climb starts up the route 323, through the Sfulmini snowfield to Bocca di Armi. From this point the via ferrata delle Bocchette will start in about 30 minutes, when you reach the first iron staircase that leads to the east side of the Torre di Brenta. Finally, the real climbing on the ledge starts of the central Bocchette which leads to the key point of the trail: the ledge in a shape of a horseshoe of the Figari path. At this point, the route is no wider than 50 cm, very exposed but well equipped with stunning view on Campanile Alto and Campanile Basso. From now on, the path goes slightly downhill, along the east side. Bypassing the Campanile Alto with a stopping point with a view, then down a serpentine path with often wet rocks. Continue to go down this path in a very close distance to the Campanile Basso. After bypassing the crossroads with a short climb on a slippery slope, you reach an iron cross and then descend to the right on the west side of Cima Brenta Alta. From here you find a view easy to pass ladders leading to another ledge. Finally arrive to the last iron staircase, snowfield and beatiful sights of the Cima Tosa and Crozzon di Brenta.

From glacier under the Bocca di Brenta it takes an hour to get to the Brentei path (Sentiero dei Brentei n.318) and the Rifugio Brentei. And then another hour and a half to get back to the Vallesinella hut. You can also take a different path uphill towards Bocca di Brenta and then down to Rifugio Tommaso Pedrotti from where you can get to many more iron roads in the area. 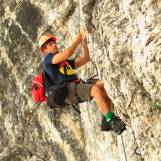 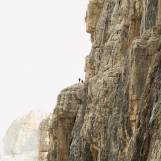 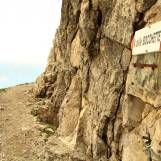 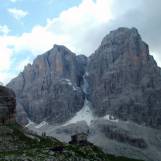